When emergency vehicle, ambulances and fire engines respond to emergency calls, other vehicles are required to pull over to the right side of the road and come to a stop.

So…. DO they?    Emergency personnel (firefighters, paramedics, other EMS) report that drivers often neglect to do so.     (It’s a crime, heah!)

“These problems have always existed, (but) it’s gotten worse,” reports a firefighter Chief.

Further complicating the matter are drivers who are distracted by activities such as talking on their cellphones, listening to headphones, eating, yes – even applying makeup on their face!

“Everybody seems to be doing everything in their vehicles except driving!” says one paramedic.

Also, NOT GOOD is that modern vehicle design also affects driver awareness because outside noise is muted due to the “improved” vehicle design.    So they don’t HEAR the emergency vehicle – how mindless is that?

Sirens on any emergency vehicle, fire engines and ambulances are approximately 120 decibels, which is comparable to a car horn.

It is believed only about 30 percent of drivers follow the law and pull over to the right.   If at least one driver does pull over, many times other drivers will follow suit.    SO, YEAH to every one who does care about their community and someone’s right to emergency care and who DO PULL OVER for an emergency vehicle?   You are a role model to many other drivers.    Great.    But let me say one more time – ONE HUNDRED PERCENT of motorists should be pulling over.    Don’t be a doofuss.

As a 15-year CPR, Babysitting CPR and First Aid Instructor, who continually stresses the need to

a) recognize an emergency and

it drive me NUTS that any dense motorist gets in the way of that vital response. 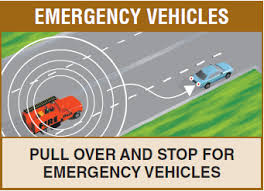 POST THIS on your refrigerator, your social media, tell teen drivers, on your job board and on your brain about emergency vehicles:

-Pull over to the right side of the road when emergency vehicles are approaching.

-Do not stop in the middle of the road.

–Do not wear headphones while driving.

-Do not talk on cellphone or text while driving.

-Do not be distracted by vehicle crashes – “Rubbernecking” causes additional crashes.

Give me a quick call. I am happy to answer any questions!